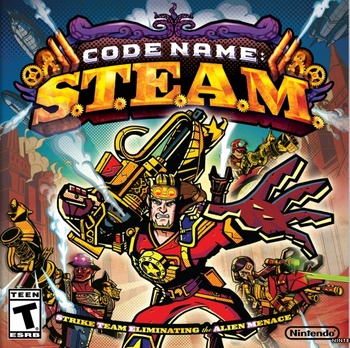 Code Name: S.T.E.A.M. is a 2015 Nintendo 3DS game by Intelligent Systems (reputed for developing the Fire Emblem and Nintendo Wars series) and with involvement by Shigeru Miyamoto. The art and setting are inspired by American comic books (the styles of Jack Kirby, Bruce Timm and Mike Mignola were specifically highlighted), and the gameplay merges the Turn-Based Strategy genre with aspects of a Third-Person Shooter.

In an Alternate History where steampower has revolutionized society, President Abraham Lincoln has received evidence of an imminent invasion by beings from beyond our world. Faking his death to go underground, he forms S.T.E.A.M. (Strike Team Eliminating the Alien Menace), an international team of warriors to counter the threat. This team includes the likes of Henry Fleming, John Henry, the (not-so-)Cowardly Lion, Tiger Lily, Tom Sawyer, and other classic literary characters.

The game features amiibo support, allowing the player to summon Marth, Ike, Robin, and Lucina from the Fire Emblem series to join their team.

The game's tropes include: