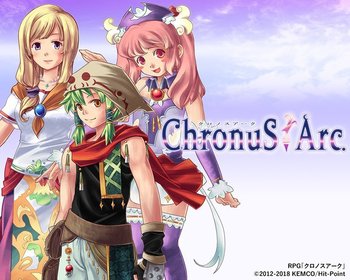 Chronus Arc is a mobile phone RPG developed and published by Kemco is another intentional throw-back to Super Nintendo RPGs of the 16-bit era. Along with the phone version, a 3DS port was released on October 1st, 2015, and a PC port on November 14, 2018.

The Hero, Loka, is a Sorcerer Knight in training under his teacher, Teth, and the game begins with the two of them preparing for the "Time Rewinding" ceremony that occurs within their country of Kiribay once every decade wherein broken items are restored to normal. While traversing a nearby dungeon to obtain the MacGuffin necessary for the ceremony, Loka and Teth are attacked by a mysterious army. Loka is sent to return to the castle for reinforcements. When he returns, both the invaders and Teth have disappeared. Loka then sets out on a journey to find the missing Teth and discover the invader's motives.

Much like the company's previous title ported to 3DS, the battle system is turn-based with each character having a specific job and skill set, but a much greater degree of character customization with skill enhancement and class changes (due to having a smaller playable cast). The gameplay can be seen sharing elements from numerous other RPGs from the 16-bit era such as Final Fantasy, Tales of Phantasia and Lufia II.