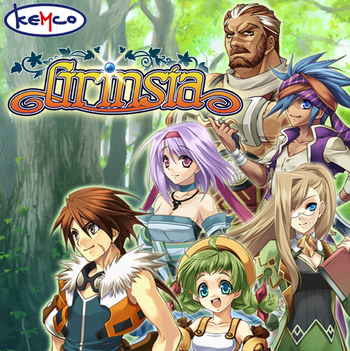 Grinsia is a mobile phone RPG developed by Kemco and published by Nicalis that is an intentional throw-back to Super Nintendo RPGs of the 16-bit era. Along with the phone version, a 3DS port was released on May 8th, 2014.
Advertisement:

The game starts off with a family of treasure hunters led by patriarch Grieg, his son, The Hero, and his daughter, Milka, arriving in the port town of Dea in order to explore some nearby ruins for the sake of finding treasure. After eluding knights of the Evil Empire within the ruins, they encounter a statue of the goddess, Mave, one of twin goddesses who created the world, who comes to life and tasks the family with obtaining and protecting six Relics from falling into the hands of the empire and being used for evil purposes.

The battle system is turn-based with each character having a specific job and skill set (though some skills are not unique to a single character) and overall the gameplay contains elements of numerous other RPGs from the 16-bit era such as Final Fantasy, Phantasy Star and Lufia.