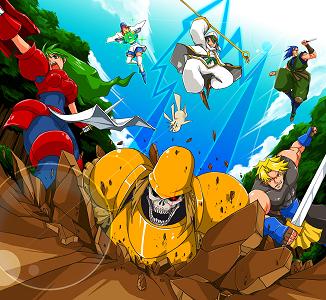 Our heroes, rushing into battle.Who? Clockwise from the left: Serena Corsair; Nicole Neil; Randy M. Green and his familiar, Nando; Ginjirou Ibushi; Samuel Han; and the Undead Hero.
A magically super-charged Beat 'em Up for the Sega Saturn by Treasure. A group of adventurers find a powerful magic sword, but unfortunately, The Empire has been looking for that very weapon. A red-armored girl bursts into their room just as Imperial soldiers start streaming in. They fight their way out of the town to a nearby graveyard, only to be confronted by a robot. In the middle of a difficult fight, suddenly a massive armored skeleton, the sword's original owner, arises from his grave to claim it.
Advertisement:

Guardian Heroes is, in a word, frantic. Lots of different characters, both allies and enemies, with nearly all of them available in the game's Versus Mode, with full six-player support. The gameplay is mostly two-dimensional, with the action spread across three planes, giving plenty of space for some massively large magic attacks (Treasure had experimented with this with Yu Yu Hakusho: Makyou Toitsusen for the Sega Mega Drive). Of the heroes, each has a wide variety of attacks, plus magic spells which as their levels increase, gets bigger and more destructive. Through the game, you're followed by the aforementioned Undead Hero, who can be given different commands such as protecting you, staying his sword, attacking of his own initiative, or just going berserk and burning everything before obliterating whatever's left with a Sphere of Destruction. Depending on your choices during the course of the game, you could liberate the kingdom, storm the gates of Hell, storm the gates of Heaven, or face down a robotic army led by Golden Silver, the final boss of Gunstar Heroes.

A sequel, Advance Guardian Heroes was released, as the name suggests, on the Game Boy Advance, which ties the game even closer with Gunstar Heroes. In this game, the villains from the previous game have returned centuries later, ready to try again to take over the world. A young soldier allows himself to be possessed by the spirit that inhabited the Undead Hero to fight them again.

After roughly 15 years, Treasure announced in May 2011 that they would be re-releasing the original Guardian Heroes on Xbox 360 via Xbox Live Arcade, as Guardian Heroes HD. As the name implies, the game was updated with HD graphics, new artwork, new A.I., re-designed gameplay mechanics, a re-translated script, new voice-acting, online co-op, and a new 12-player online mode, although the option to play it like the original Saturn version is also available. It arrived on October 12, 2011, and at the low price of $4.99.