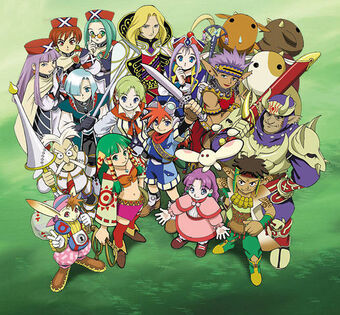 The first installment in the series of the same name, Grandia was developed by Game Arts and originally released for the Sega Saturn in 1997; however that version was never released in the West due to the system's poor sales and Sega of America CEO Bernie Stolar's attitude against 2D games. The game was ported to the Playstation two years later, and this version localized and released by SCEA in the US and by Ubisoft in Europe. In 2019, GungHo Online Entertainment, the owner of GameArts since 2005, brought the game to the Nintendo Switch in August, and PC via Steam in September. It remains the best-selling entry in the series.

It's the Age of Exploration, and aspiring adventurer/local pest Justin is itching to leave the mining town of Parm and pick up where his late father left off: Finding the ancient civilization of the Icarians. Along with his stalwart childhood friend Sue, the two teens perform enough favours around town to finally earn a seat on the steam liner destined for the great unknown.

Unfortunately for them, it happens to be the age of exploration as Brought to You by Disney. The adventurers' trade is heavily regulated, with every crook, shakedown artist, and bureaucrat in the western hemisphere barring access to the New World. There's also the Garlyle Forces, a private army originally established to make the frontier safe, but whose incredible technological advantage (no doubt due to their plunder of Icarian relics) has resulted in a suffocating security state. Which is quite handy for them in case their top General decides to... oh, lose his goddamn mind.

Being primarily aimed at children, the plot makes no efforts to be ground-breaking. Hot-Blooded protagonist with red hair and blue clothes? Check. Ancient civilization? Check. Save the girl? Take a guess. Tropes Are Not Bad, of course. Some enjoy the plot, as it makes interesting use of the Motifs of the "End of the World" (no, not that one) and adventurers, the protagonist is a great example of an aversion of The Chosen One, and the whole cast of characters is a textbook example of good Character Development in action. It also does an unusually good job of making the world seem like it's actually unexplored, whereas most RPGs have a map which rarely exceeds Baby Planet size.