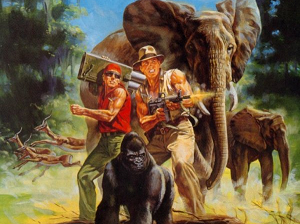 Gen, Burn, and their animal friends.
Growl, known as Runark in Japan, is a side-scrolling Beat 'em Up by Taito released in 1990.
Advertisement:

In the early 20th century, a ring of evil poachers is going around Africa slaughtering innocent animals, and it's up to our four heroes — the rangers Gen, Burn, Khan, and Jack — to beat them into submission. The game's most distinctive feature, besides the variety of weapons, is that when you free an animal from the poachers' grasp, it fights alongside you for a short while.

A Sega Genesis port was released in 1991. It was relatively accurate to the arcade version, with the major changes being the lack of a multiplayer mode, scaled-down graphics, and the replacement of the lava stage with another brawling level. The arcade version is included in Taito Legends 2 for the PlayStation 2 and Xbox.