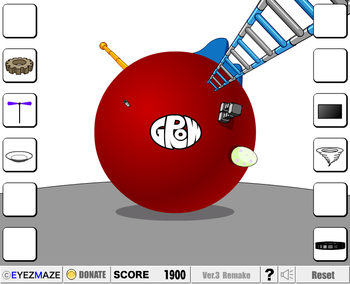 The first game of the series.
Advertisement:

The Grow games are a series of quirky Flash puzzles made by On. You control a Sugar Bowl world, which you can fill with cute people, equally cute monsters, strange items, and odd architecture. The gameplay is simple: the game displays a selection of items, and the player must pick the items in the right order to advance the story. The items grow each turn and interact with ones previously chosen, providing clues that the player can use to figure out the correct sequence.

The appeal of the games lies in the cartoon humour and surreal events that you trigger as you explore the possible sequences and get closer to the solution. Sometimes, the wrong choices can be almost as entertaining as the right ones.

All the games are available to play online on Eyezmaze, the author's website

, which also have other games with a similar ambiance by the same person. (The website is under reparations since Flash's death)

The author also made Grow Comics

where he posts news and occasionally do games with audience participation.