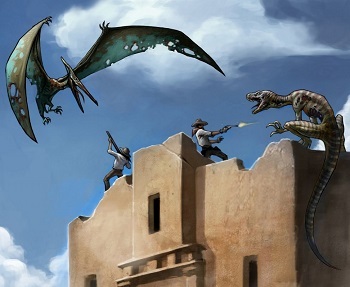 "Cowboys vs. Dinosaurs"? I'd watch that.
The end of the Mesozoic era... A herd of Chasmosaurs is unusually jittery! They now know they have more to fear than Tyrannosaurs! Now they face an even greater danger...Tyrannosaurs in F-14s!
—Calvin and Hobbes
Advertisement:

There are some things you just can't plan for. An opponent from completely outside your genre is one of them. A cowboy is not expecting to fight demons, a demon is not expecting to fight aliens. In more mild cases, this simply requires a readjustment of tactics, but more extreme situations (such as Cthulhu showing up on a Buddy Cop Show) are simply going to end quickly and messily.