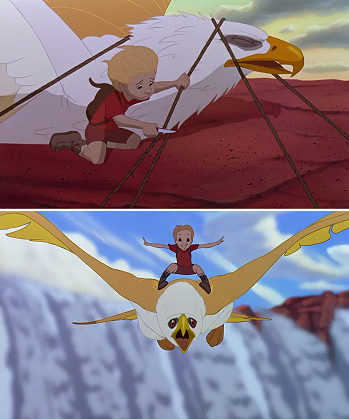 "Do not eat me when I set you free!"
— D'Leh before saving a saber-toothed cat from drowning, 10,000 BC
Advertisement:

Just as in the ancient fable of Androcles and the Lion, a character befriends or aids a wild creature. In a moment of need, the creature returns the favor. Sometimes the creature was a Pet Baby Wild Animal, and the character wonders "Why Isn't It Attacking?" before recognizing it.

While a pessimist will claim that No Good Deed Goes Unpunished, this Trope can often prove the exact opposite, and sometimes save the hero from certain doom.

Hitchhiker Heroes often acquire animals like this; they are often Talking Animals, perhaps even humans trapped in an animal's body.

For your safety, however, please note that this is not Truth in Television. The vast majority of animals are simply not intelligent enough to grasp the ethical concepts involved in this sort of thing. In fact, most won't even be able to realize that you're trying to help them, and will instead associate you with whatever situation they're in, and lash out at you. And even if you're dealing with one of the rare handful of animals that are intelligent enough to both understand that you helped them and be thankful for it, those animals are by that very fact also intelligent enough for different individuals to have different personalities, so even then there's a chance that the particular individual you saved happens to be too much of a Jerkass to care. Unless you are a trained professional, DO. NOT. APPROACH. WILD. ANIMALS. THAT. ARE. IN. DISTRESS. Instead, contact a wildlife rescue immediately.

See Character Witness when this Trope applies to humans and other sentient creatures. A specific kind of Chekhov's Gunman.

See also: Predator Turned Protector, Interspecies Friendship, I Owe You My Life, Disproportionate Reward, Character Witness, Rampage from a Nail, Laser-Guided Karma, Because You Were Nice to Me, and Come Back, My Pet!. Contrast with The Farmer and the Viper.