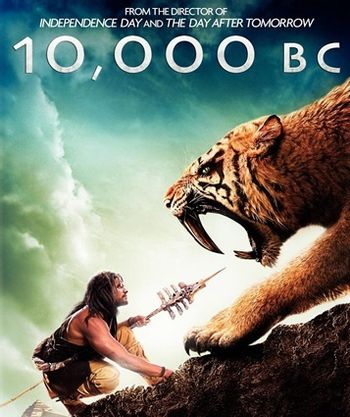 A spectacularly historically inaccurate movie, directed by Roland Emmerich and released in 2008, about a mammoth-hunter named D'Leh, ostensibly set in the year 10,000 B.C. During a "great hunt" of a stampede of wooly mammoths, D'Leh appears to slay a gigantic ultra-mammoth and is awarded his tribe's sacred artifact, the White Spear. This allows him to claim any woman in the tribe as his wife, and he chooses his childhood friend Evolet (who was originally from somewhere else, and found by the tribe wandering the tundra half-dead). However, guilt over not actually slaying a mammoth causes him to return the spear, angering said childhood friend.

Soon after, horsemen with swords show up and kidnap many of the villagers, including Evolet. He and the few surviving hunters set off on a quest to track down these raiders and get their families back.

After traversing some seriously weird terrains, and having a few small adventures along the way, D'Leh is separated from the rest of the party. He ends up at an agricultural village in a desert. There, he manages to impress the local chief, and makes friends with the natives. It turns out that this and many other villages have been victimized by the same raiders that kidnapped D'Leh's people, and taken to "the Mountain of the Gods". After witnessing that D'Leh has befriended a sabertooth tiger, the chief concludes that D'Leh is The Chosen One who will overthrow the evil god who the horsemen work for.

Following this, all the desert tribes gather together to march towards the Mountain of the Gods (which turns out to be a gigantic and work-in-progress pyramid). There, the prisoners are being used as slaves in a big construction job. The impromptu army attacks and triggers a slave uprising. D'Leh himself kills the false god who's running things, and everybody is freed.

The chief gives D'Leh some seeds, and instructions on how to farm. D'Leh, his wife, and those mammoth-people who remain return to their tundra home to rebuild.

One of the most infamous and blatant examples of Rule of Cool in all of film history. Make sure to bring your MST3K Mantra.