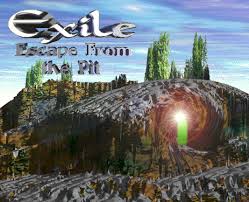 Exile (verb) To banish or expel from one's native land. Exile is also a place - many miles of caves and tunnels, far below the world's surface...
— Exile III introduction
Advertisement:

Exile was a series of Fantasy RPGs created by Jeff Vogel of Spiderweb Software. They remain available

as freeware for older computers running Mac OS Classic or 32-bit Windows. (Exile III was also ported to Linux by a third party.) The four games were later remade as an isometric 3D series called Avernum, which added a fifth, sixth, and seventh installment.

The eponymous nation is a vast network of caves to which the surface world banishes its criminals, dissenters, and misfits. In each game, you play a team of Exiles swept up in conflicts between the people of Exile, their nonhuman neighbors in the caves, and the cruel Empire that rules the surface. The games in the series are:

Not to be confused with Myst III: Exile, or a completely different Exile created in 1988 for the BBC Micro, or the Action RPG Path of Exile which shares the premise of being exiled to the very inhospitable place.