The Wall Around the World 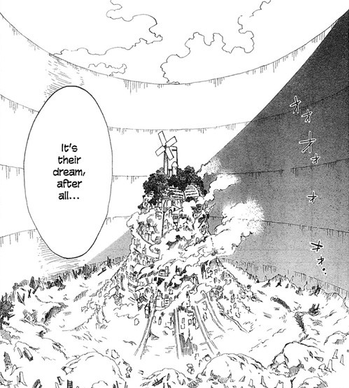 "I don't want to die inside these walls without knowing what's out there!"
— Eren Yeager, Attack on Titan
Advertisement:

All around where you grew up is a barrier. No one knows what lies on the other side. Or if they do, they're not telling. It could be Here There Be Dragons, or your ancient enemies, or it could be that you and everyone you know is Sealed Good in a Can. (Or evil, who knows?) Passage through will be difficult if not impossible, for what good is a barrier if anyone can walk on through?

The wall can surround a single village, a town, a continent, a world, or even an entire galaxy. Or it could seemingly surround nothing, and simply mark a barrier between one world and the next.

Note that, despite the name, the barrier does not have to be a literal wall.

If the barrier surrounds a community, it is an isolated Small, Secluded World or City in a Bottle or possibly a Domed Hometown. Contrast with The Great Wall, which bisects the world, dividing it into two separate parts, and The Outside World, what lies outside the walls. When the wall is so big people start living on it, you have yourself a Dyson Sphere.

Alternative Title(s): Wall Around The World, The Wall Between Worlds