Literature / The Legends of Ethshar 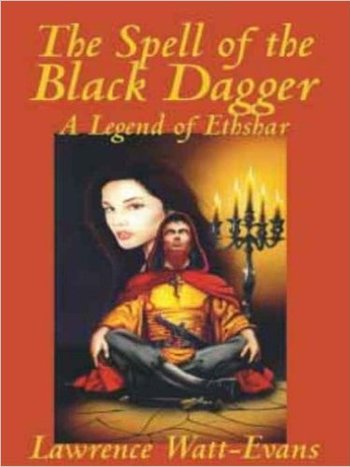 The Legends of Ethshar is a fantasy series by Lawrence Watt-Evans.
Advertisement:

It's loosely based on the Roman Republic. Currently, the most influential country of the world is the Hegemony of Three Ethshars, which defeated the evil, magic wielding Empire of the North, while the former Ethshar (Old Ethshar) split into hundreds of tiny kingdoms. There's trade, war and pirates...

But above all there are magic users. Ethshar is home of dozens of magic specialists and various kinds of magicians - there's six most powerful ones, and dozens of lesser ones like necromancy or alchemy.

Wizardry - Wizardry taps into essentially the Chaos of the World, and therefore is thought to be the most powerful kind of magic. A skilled wizard can, if he knows a specific spell, turn frogs into princesses, create illusions, enchant swords, create castles in alternate dimensions or achieve immortality. Most of their spells use a magical dagger called an athame, as well as material components like blood of a virgin or dragon's tongues.

Sorcery - Sorcery uses the Order from outside the world and is based on creating enchanted objects that cast spells. They manufacture many powerful devices that can sometimes be used even by the mundanes. Some resemble high-tech devices, others are simply magical.

Warlockry - Warlockry is essentially sufficiently advanced telekinesis, extending to manipulating small objects, or even on the molecular level (electrokinesis, pyrokinesis). They also have some Psychic Powers related to sensing the structure and presence of matter. Warlocks derive their power from a mysterious Source, but when they become powerful enough, it summons them, never to be seen again.

Witchcraft - Witchcraft is psionics - including mind reading, telekinesis or pyrokinesis - which doubles with warlockry. The power is derived from witch's own strength; doing something by witchcraft is exactly as tiring as doing the same task by mundane means. Consequently witchcraft lacks raw power. On the other hand, witches can use their power in more subtle and efficient ways since they have better extra-sensory perception. Furthermore, witchcraft is quite versatile - witches can even use some basic spells! Unusually, witchcraft isn't gender-specific; both male and female practitioners exist and both are called witches.

Theurgy - Theurgists can use prayers to ask gods for specific favors. Actual faith is not required and prayers resemble spells. Most theurgists are priests, but the gods aren't really interested in worship.

Demonology - Summoning demons and forcing them to do your dirty jobs. Technically it's not illegal (except in some of the Small Kingdoms) nor evil, but it isn't nice. Most demons require souls or blood sacrifice - a few require killing a victim.

Ethshar novels with their own trope pages include:

The other novels in this series provide examples of: