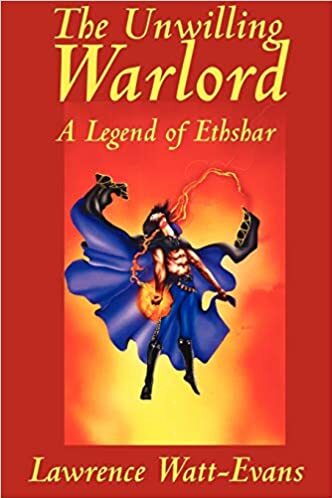 The Unwilling Warlord, third of the The Legends of Ethshar fantasy novels by Lawrence Watt-Evans, chronicles the rise of Sterren the Ninth Warlord, and the establishment of the Empire of Vond.
Advertisement:

Semma, a tiny kingdom, has managed to enrage two of its larger neighbors. War is on the horizon, and the Eighth Warlord has chosen this inconvenient time to die without leaving an heir nearby to take the position.

Meanwhile in Ethshar of the Spices, a young gambler named Sterren learns more about his family than he ever wanted to know when a group of intimidating foreigners show up at the tavern where he's been fleecing suckers and tell him he's got a new job. When the swords come out, he realizes he doesn't have a choice.

Sterren has no training and no experience, his subordinates are fops and idiots, and his army consists of eighty-five men against hundreds.

Also, if he loses it's a sure thing that the victors will have him executed.

There's only one way to win, but will the solution prove worse than the problem?