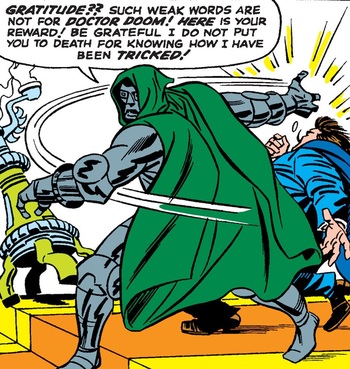 "Since saving New York, the Ghostbusters have been sued and lost all their money. Ungrateful shits. Did the fire department get sued after 9/11, as well?"
— MikeJ on Ghostbusters II
Advertisement:

Heroes save people, even enemies. What's more, if a hero saves a rival or villain enough times, you'd expect them to change their attitude towards the hero into one of at least grudging respect or having honor dictate that they "owe them one".

Heroes don't always get gratitude, recognition, or even a basic "thank you" for their efforts, and sometimes, any thanks are patently insincere. Rivals and enemies in particular tend to treat these saves with the same gratitude for the air they breathe (read, none). And that's if they aren't actively angry at being put through the ignominy of being saved by those filthy freaks, they'll usually betray such mercy at the first opportunity. Ungrateful Bastards or Bitches. Nothing says better that someone is an irredeemable, honourless scumbag more than treating the (often unwarranted) mercy and kindness as nothing or even worse as a weakness to be exploited.

There are odd times nevertheless, where the lack of gratitude may be explained or even more surprisingly justified by a number of reasons that make the subject less of a bastard and more of a rational fed-up individual. For instance who can blame characters who get to pay the price because the supposedly good intentions of the Heroic Wannabe left them worse than before (and possibly led to their injury or destruction of their property when neither was at stake), especially if this assistance was unasked for in the first place and may have even been forced upon them? It also feels less dishonourable if the ungrateful character never even wished for the gift that the heroes offer them. If its let's say a Death Seeker who gets saved from certain death, they won't come across as quite as scummy for being indignant at being denied their chance as much as a Dirty Coward who begged and grovelled over being saved, and despite their appreciation for their life, had none for the ones who protected it, to spare. Also it won't count if its the saviour's fault that they were stuck in that situation to begin with and that's without counting the cases where they may feel that saving them once doesn't make up for all the other things that they did to them. And of course, a villain may be disinclined to feel gratitude if the help comes from someone who betrayed their enemy and feel obliged to "reward" them accordingly.

This is true even if it's a forced Enemy Mine situation, and they never even acknowledges the service rendered or is grateful, much less gets Character Development or a change in their relationship to reset. This might be done either to show how utterly evil (or at least callous) the enemy is, and avoid having the show's formula change with the Big Bad growing unable to kill or hate someone who has saved them so often.

See also Never Accepted in His Hometown for cases where the hero's own people act like this, Ungrateful Townsfolk or The Farmer and the Viper for people who carry it to the point of outright hostility or betrayal, What Have You Done for Me Lately? for people being particularly blunt about their lack of gratitude, and Zero-Approval Gambit for situations where the hero wants to be disliked.

Contrast Grudging "Thank You", and definitely I Owe You My Life. Probably not related to the inglourious kind. See also Entitled Bastard who not only doesn't thank the heroes, but also expects them to save them anyways.