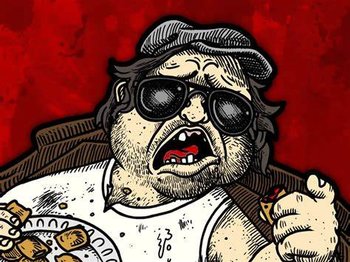 "I've analyzed this film with a team of cheerleaders, and they came up with one unanimous conclusion: that if I let them go, they won't tell nobody."

Mr. Plinkett Reviews is a movie review web series by RedLetterMedia, and the company's Breakout Hit. Mike Stoklasa performs in voiceover as Harry S. Plinkett, who painstakingly reviews terrible films and sub-par offerings of beloved franchises. The character of Mr. Plinkett is a cantankerous old man prone to mumbling, mispronouncing words, and getting sidetracked on unrelated tangents. His reviews are heavily sprinkled with increasingly overt insinuations that he is a Serial Killer who murdered his wives and regularly kidnaps other women. The videos are notable for their length, often extending beyond an hour. RedLetterMedia earned mainstream attention with the Mr. Plinkett review of Star Wars: The Phantom Menace, and it remains their most popular and celebrated offering.