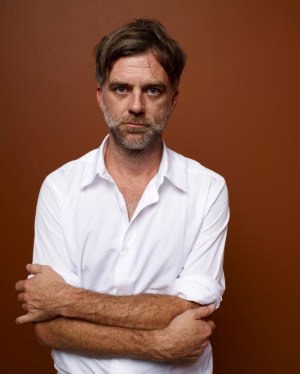 P.T. Anderson will not take your shit. His eyes and mild smirk say so.
Influences:
Advertisement:

Paul Thomas Anderson (born June 26, 1970), more commonly known as P.T. Anderson, is an American filmmaker regarded as one of the greatest of his time, with notable works of his including Boogie Nights, Magnolia, Punch-Drunk Love and There Will Be Blood.

Anderson has been said to belong to the "VCR Generation" of filmmakers, grouped with directors such as Quentin Tarantino, Richard Linklater, and Kevin Smith, and described as filmmakers whose careers were founded not upon film school training, but from an enthusiastic love of movies. He is the sole screenwriter for all of his films.

We will describe Anderson's directorial style thusly: if Robert Altman and Martin Scorsese had made sweet, passionate love and Jonathan Demme and Stanley Kubrick were the godfathers, P.T. Anderson would have been the fruit of their priapic loins.

Awful mental pictures aside, Anderson was Hollywood royalty well before he became a director, being the son of the late actor and announcer Ernie Anderson, whose most famous character Ghoulardi inspired the name of his production company. His life partner is Maya Rudolph, and they have four children together.

P.T. Anderson and his works provide examples of: