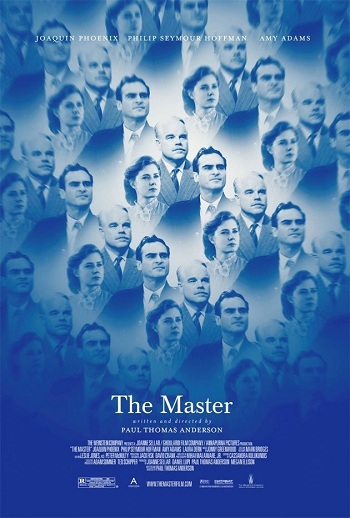 No, not that Master.
Freddie Quell: I don't know what I told you but if you have work for me to do I can do it.
Lancaster Dodd: You seem so familiar to me.
Freddie Quell: Yeah. What do you do?
Lancaster Dodd: I am a writer, a doctor, a nuclear physicist and a theoretical philosopher. But above all, I am a man, a hopelessly inquisitive man, just like you.
Advertisement:

The Master is the sixth feature film of director Paul Thomas Anderson. It was released on September 14, 2012.

The film stars Joaquin Phoenix (in his first film role after a two year hiatus) as Freddie Quell, a misguided young man who, after demobilizing from World War II, falls under the sway of charismatic Lancaster Dodd (Philip Seymour Hoffman), the leader of a Church of Happyology-style cult called the Cause, and his wife Peggy (Amy Adams). From there on, the film becomes a character study between Dodd and Freddie as their relationship varies between "Leader and Follower", "Teacher and Student", "Father and Son" and "Master and Slave".

Laura Dern appears as a devotee of the Cause who despite her zeal asks one too many pesky questions. Rami Malek appears in one of his first big movie roles as Dodd's son-in-law Clark, who seems jealous of Freddie's attractiveness to both Dodd and Clark's wife. Jesse Plemons plays Dodd's son Val, who is pretty cynical about the Cause.

Also, this film is significant for being the first visual narrative production shot primarily on 70 millimeter film in nearly 16 years, the last being the 1996 film adaptation of Hamlet.