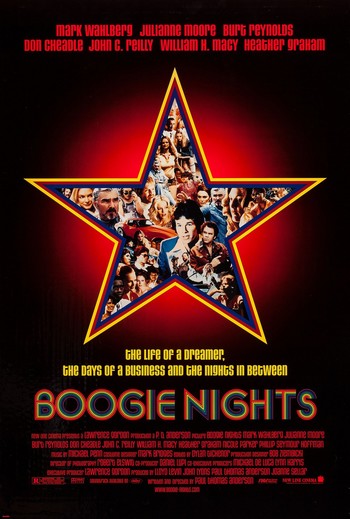 "I'm a star. I am a big, bright, shining star."
— Dirk Diggler
Advertisement:

Adult film producer Jack Horner (Burt Reynolds) spots busboy Eddie Adams in one of his regular nightclubs, and in talking to him learns of both his extremely generous endowment and his quick recovery time (he has already brought himself off twice that evening for $10 a look). After a fight with his mother, Eddie runs away to accept Horner's offer of film work, and soon finds success on the screen as Dirk Diggler, the star of the Brock Landers action/porn series.

However, the luxuries this affords Diggler and his fellow actors come with a high price, especially when those luxuries begin to include increasing amounts of cocaine. Many of the actors also struggle to find success or happiness outside their adult film careers, as Dirk's co-star and mother figure Amber Waves (Julianne Moore) loses a bitter custody battle with her ex-husband, while another co-star, Rollergirl (Heather Graham), drops out of high school after her career makes her an object of cruel mockery by fellow students), and Buck Swope (Don Cheadle) is unable to secure the loan that would enable him to break into business. The industry itself is also changing with the rise of videotape, and Jack Horner's dream of making Porn with Plot is destined to fall by the wayside.

A major Growing the Beard film for Anderson that got him his Auteur License and also doubling as the Star-Making Role for Wahlberg and a Career Resurrection for Reynolds, Nights was acclaimed by both critics and audiences, and even got Anderson nominated for Best Original Screenplay.