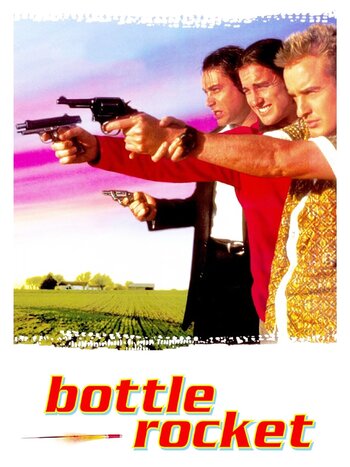 "On the run from Johnny Law. Ain't no trip to Cleveland."
"They'll never catch me, because I'm fucking innocent."
— Dignan
Advertisement:

A 1996 film directed by Wes Anderson, starring Owen Wilson, Luke Wilson, Robert Musgrave, and James Caan. This film marked the major acting debut of both Wilson brothers and was the directorial debut for Anderson, who also wrote the screenplay with Owen Wilson.

After Anthony Adams (Luke) is released from a mental hospital following a nervous breakdown, his longtime friend Dignan (Owen) unveils his decades-spanning plan to take charge of their lives. The first step is to join their mutual friend Robert (Musgrave) on a crime spree to prove themselves to the "legendary" thief, Mr. Henry (Caan). During their incompetent hijinks, Anthony starts a courtship with a hotel maid who doesn't speak English. Hilarity Ensues.

The film only screened in 48 theaters during its initial run and recovered only a small fraction of its $7 million budget, though it was critically praised and has enjoyed increased attention due to the success of its creators' later careers.