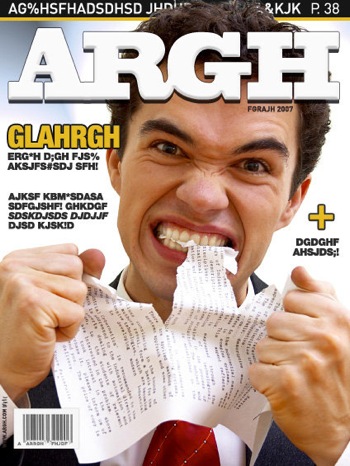 on his foot, Calvin and Hobbes
Advertisement:

RAAAAAGH! Characters are so angry, ticked off or shocked that they're literally unable to form a coherent sentence. Other strong emotions are sufficient to render a person unable to speak proper English (or whatever language is being spoken at the time), but shock, anger, and pure rage are the most common. GYAAARRRRGH! It usually takes a little while for him or her to recover, at which point he or she explodes into rage normally.

Often includes Cluster F-Bomb, although these days it's popular to have normally foul-mouthed characters to just be too mad to even swear coherently, reducing them to Curse Cut Short at best and Gosh Dang It to Heck! at wor-hor-hor-hor-horst! Alternately, enraged gibberish can serve as a kid-friendly substitute for profanity, with hints of what the character meant to say slipping through. In written media, it's sometimes represented by Symbol Swearing. GRRR!

Do not confuse with Engrish, or with "Anglish".* (A reconstructed version of English where words with Latin or Greek roots are replaced by Anglo-Saxon-derived equivalents, such as "waterstuff" for hydrogen.) Also compare Sarcasm Failure, Gagging on Your Words, Dumb Struck, and Foreign-Language Tirade. If it's laughter that prevents someone from speaking coherently, that is Corpsing. FAAAAAAIIIIIIIII!! Truth in Television. Remember the last time you stubbed your toe? GRAAAAAGH!