Visual Novel / The Eden of Grisaia 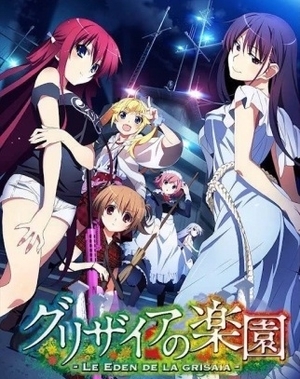 The Eden of Grisaia (Grisaia no Rakuen) is the third part of the Grisaia trilogy which began with The Fruit of Grisaia and starts off where The Labyrinth of Grisaia ended: with Yuuji arrested for suspected terrorism. Following the public announcements and video of Yuuji apparently committing the crimes, he is taken away by Ichigaya, the organization he works for as a black ops agent. Yuuji himself seems fatally resigned, however, believing that he has fulfilled his promise to Asako to save five people and is therefore willing to die so he can hopefully be with her again.

All is not so simple, however. Ichigaya knows he did not commit any terrorist actions, but Yuuji did fail to assassinate the leader of the actual terrorists, Heath Oslo. Instead, he is being used as a bargaining chip as the only surviving member of an experimental group designed to produce superior soldiers through a combination of conditioning and drugs. The third involved party is that of the Mihama girls, who don’t know how they can help but are determined not to let Yuuji be killed or traded away for some political advantage. Though at first their efforts seemed doomed to failure, a mysterious figure answering to the name of Thanatos appears before both them and Yuuji. To the latter, she reveals herself to be his lost sister Kazuki.

Rakuen is divided into four basic stories. The main storyline follows as above and upon completion unlocks both an afterstory and the Prologue of Grisaia, a short story detailing how all five girls came to Mihama and ending with the announcement that Yuuji will soon be attending. The fourth and final section is a series of sex scenes involving minor and supporting characters with varying levels of plausibility between the various scenarios.