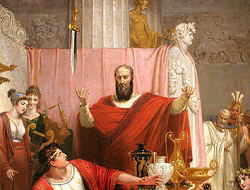 Dionysius had a point to make.
"Fear will keep the local systems in line. Fear of this battle station."
— Governor Tarkin, stating his named doctrine

in A New Hope
Advertisement:

A weapon used as a deterrent, to sway people into acting in a certain manner. This comes from the second moral of the original story of the Sword of Damocles, where "The value of the sword is not that it falls, but rather, that it hangs."

More often than not, the weapon is intended to have some type of height advantage, to more explicitly invoke this image. This can include launchable weapons that once off the ground serve that purpose.

The Kill Sat may easily be an example of this. The Weapon for Intimidation is a somewhat related, smaller scale version. See also Appeal to Force and Gunboat Diplomacy. For the other moral of the Sword of Damocles story, see Prestige Peril. When two or more opposing forces have this, it's Mutually Assured Destruction.