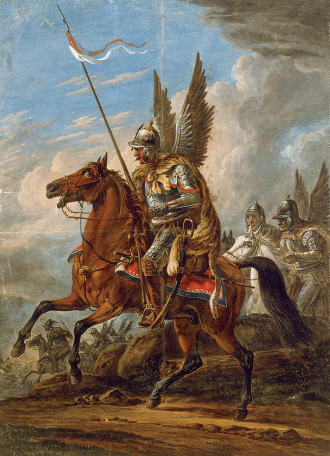 ''Then the Winged Hussars arrived!
Coming down the mountainside!''
note "Husaria's Attack" by Aleksander Orłowski.
Advertisement:

A visual element of character design that invokes the image of a Winged Humanoid. As such, it conveys the same kinds of messages about the character in question and can indicate purity, goodness, spiritual power, divinity, etc. However, because these are not actual wings they don't require an explicit acceptance of the supernatural.

These "wings" might be added deliberately by the character to make a point, or could be an incidental result of pragmatic costume choices, or even forced upon them unwittingly. Because they can be made of any material, they lend themselves well to Good Wings, Evil Wings and can convey character traits more specifically than typical bird wings. In particular, cables are often used in Cyberpunk settings to imply a Deus Est Machina.

Compare "Spread Wings" Frame Shot when the wingly image is formed by something behind the character, achieving much the same end as a Background Halo.

Power Gives You Wings is a subtrope. See also Hair Wings, Mercury's Wings, Wings Do Nothing.