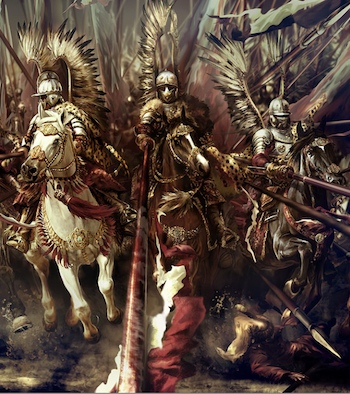 "For my Poles, nothing is impossible." - Napoleon

For your freedom and ours.
—Joachim Lelewel, referring to Polish armies in exile.

Note: For the rest of this article, please play this song

on loop while reading.

Historically, the geography and politics of Eastern Europe resulted in ways of warfare much different than in the West. In the earliest era of Polish history, the core of the military force consisted of the ruler's personal retainers, aided by footman levies, but over the course of several centuries this model was replaced by more typical feudal military. For some time, the Polish military didn't differ by much from their Western counterparts, but as Poland's attention turned eastward, so did change the ways of waging war. Most notable among Polish military quirks is the peculiar brand of Hussars, which traded being light cavalry for wings strapped to the back. From the late medieval to The Partitions Polish army was composed predominantly of cavalry that was usually formed of nobles and their retainers (and thus resembling medieval army model which became obsolete in Europe somewhere around mid-17th century). The noble cavalry wasn't the only tool of a Commonwealth general — due to the diversity of fighting styles preferred by its enemies, there was a need for variety, and his host could include commoner infantry, all manner of Western-style mercenaries, and Tatar or Cossack auxiliaries, and little known as it is, Poland had its artillery developed very well. Still, the general model resulted in very well-trained but unruly and poorly organized forces.

The loss of independence in the late XVIII Century (between 1795 and 1918 Poland was divided between Russia, Prussia/Germany and Austria/Austro-Hungarian Empire) didn't exactly turn Poles into pacifists, either. This period saw the infatuation with Sinister Scythe in several uprisings, and Poles (and with them, once more, the Polish cavalry which shone on many battlefields of the time) were amongst the most loyal allies of Napoléon Bonaparte. Poles also served across the world as exiles; Casimir Pulaski and Tadeusz Kościuszko being two notable examples, serving in the Continental Army of the infant United States during The American Revolution. Pulaski is commemorated as "the father of American cavalry".

Of course, Polish officers also served in the armies of the partitioning powers — for obvious reasons, this is not as well-known, but that actually didn't carry as much stigma as you'd expect and some of them gained quite the name in their service.

After regaining independence in 1918, Polish Army faced the task to integrate organization, tactics and equipment from the three different armies. This proved quite a task, but after several years their army was well unified and organized, and it was more than capable of fighting the Soviet Union to a draw — the unit Stalin was attached to, as a commissar, was humiliated in a Curb-Stomp Battle outside Warsaw in 1921. Contrary to popular belief, Poland's pre-war army was actually fairly cutting-edge where it could afford it (making effective use of mechanised-cavalry units in a mobile defense). However, the country sorely lacked artillery and aeroplanes and more importantly had inadequate doctrine and high-level command experience of prosecuting a large-scale war (something common to many contemporary countries including Romania and Japan).

Interestingly, it was Poland's effective use of mechanised-cavalry forces for several successful counter-attacks upon German motorised units that served as the basis for Germany's "horses charging at tanks" propaganda. Given the German Army's near-total reliance on cavalry for their logistical apparatus this denigration of the horse in Nazi propaganda seems rather odd, but is understandable given the 'futurist'/'technocratic' aesthetic of the movement. German and Soviet forces went on to use horses in logistics and combat (particularly reconnaissance) capacities throughout the war, with German reliance upon them increasing over time due to losses.

The Polish military were "The First to Fight" in World War IInote On the Allied side; On the Axis', the first shots are traditionally said to have been fired by the German battleship Schleswig-Holstein, in Danzig (now Gdansk), playing a major role in the Battle of Britain and having their own version of La Résistance (counting as much as a million people, several hundred thousands at once at its peak and maintained a whole functioning government, complete with postal and tax services, in form of the Polish Underground State functioning in secrecy right under the noses of the occupying Germans). The Polish state maintained the overall largest partisan movement in history, in fact (Tito's Balkan resistance was larger in absolute numbers past ~1943, though it didn't have the state infrastructure as developed). They also gave a great deal of Intelligence support having some of the best field agents in Europe, and cryptographers who were Good with Numbers (they actually broke the merchant version of the Enigma code and thus greatly contributed to the joint effort of breaking the military one). It is worth noting that a large part of the Polish La Résistance consisted of soldiers and officers (many of them veterans of the First World War) who decided not to surrender and continued to fight as partisans. Polish troops that had successfully withdrawn from occupied territory were later formed into many units fighting along the Allies, usually British. Among the best known are the 1st Independent Parachute Brigade (Market-Garden), 303 Squadron (the highest-scoring squadron in the Battle of Britain), the Polish Independent Highland Brigade (Narvik Campaign), the Polish Independent Carpathian Brigade (Siege of Tobruk), the 1st Armored Division (Falaise pocket) and the Polish II Corps (Italian Campaign), which notably included a bear named Private Wojtek

among their enlisted men (he didn't fight, but he did carry crates of artillery shells). During WWII Poland lost nearly 17% of its pre-war population during the war and subsequent occupations (the second-highest casualty rate of WWII), and held out against the simultaneous invasions of Russia and Germany longer than France would in 1940.

During the communism years, the Soviet way of doing things was imposed on Warsaw Pact member Poland. Since the end of communism, Poland abolished conscription and is moving to NATO standards. The modern Polish military is therefore a volunteer force consisting of five branches: apart from the Army, Navy, and Air Force, there are the separate branches of the Special Forces and the Territorial Defense.

In 2012, there were negotiations about building a part of the U.S. anti-missile shield (an idea proposed by theBush administration) in Poland, Poland having even made quite a fuss over it. The Polish reasoning was that having American forces on Polish soil would ensure that the Americans would be more likely to move in case anybody threatens Poland, similar to how American forces stationed in South Korea would be forced to respond to a North Korean attack. (Seeing what happened to Poland throughout the 20th century, it's at least understandable). Although not much really came from it back then, there is some small chance of resumption of talks about this topic, due to the worsening situation on Ukraine and aggressive moves of Russian government. Also, current situation resulted in increased military budget, greater amount of exercise with allied nations and developing plans in the event of attack on Poland or Baltic Republics.

Since its entry to NATO in 1999, the Polish Army participated and participate in numerous peacekeeping, humanitarian, police, training and observational missions in Europe, Africa and Asia (especially in Kosovo, Iraq, Chad and Afghanistan). Currently there are plans to send a small contingent of soldiers (with British and Americans) to train Ukrainian officers.