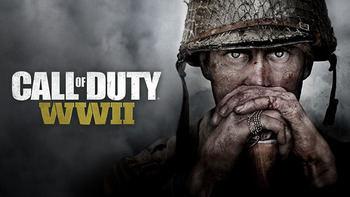 Back to the past.
"Welcome to the Bloody First. You're a long way from Texas, farm boy."
Advertisement:

Call of Duty: WWII is the fourteenth installment in the Call of Duty franchise, taking the series back to its roots, World War II, which hasn't been done since 2008's World at War. The reveal trailer

The campaign, much like the earlier Call of Duty titles, is set in Western Europe late in World War II. In this game proper, you play as Pvt., later Cpl. "Red" Daniels, a native Texan assigned to the 1st Infantry Division, starting with his first combat experience landing on the beaches of Normandy on D-Day. Later, he takes part is some of the bitterest battles in the Theater, including the Battle of the Bulge and the push into Germany. Additionally, a few levels also focus on soldiers from other units, such as a Sherman tank commander, or the pilot of a P-47 Thunderbolt.

The game also continues the series tradition of Call of Duty: Zombies mode, returning to its roots of Nazi Zombies.