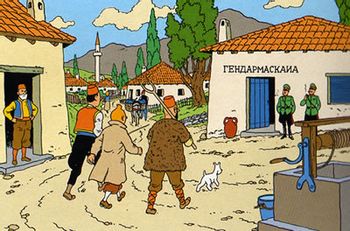 Syldavia: best known for its fezzes, Cyrillic writing, and unpaved roads.
"Is Aldovia supposed to be the Austro-Hungarian Empire but if World War I never happened, or if just Vienna had continued to truck along with a king after the Treaty of Versailles? ... Is it supposed to be Romania? Maybe it's Moldova? If so, I really need some explanation about what happened under the Soviet Union and how the royal family of Aldovia was invited back to the throne after the fall of the Iron Curtain, not only as figureheads but as people with real, actual power."
— Kelly Faircloth reviewing

Ruritania is a generic name for any archetypal fictional country located in Central Europe or the Balkans, an area of Southern and Eastern Europe encompassing most of the territory east of Germany and west of Russia. This country is characterized by its small size, backward or quirky customs, and forests full of Savage Wolves and bears. It is often the home of the Funny Foreigner.

The name comes from Anthony Hope's 1894 novel The Prisoner of Zenda. The concept originated about the same time; the idea itself was at least in part inspired by the Austro-Hungarian Empire, which was popularly (and inaccurately, for the most part) regarded by Western Europeans as incompetent and backwater. It spurred an entire genre, known as the Ruritanian Romance (which is derived from Chivalric Romance, not the love story meaning of Romance). At that time and in most early 20th century depictions, Ruritania had a royal house. The King actually did something, the Prince was dashing, the Princess was dazzling, and the headgear was quite frankly ridiculous. The kingdom was forever being schemed against by a lot of dastardly usurpers or anarchists and was a source of tension amongst the Great Powers. That last bit was actually true, unfortunately. A classic example is, of course, the original. Although it is worth noting that where most examples of this trope are set in the Balkans or Eastern Europe, the original was wedged between Germany and Bohemia and had a Germanic-style culture.

Between the wars, the typical Ruritania became slightly less primitive. Wolves, bears, and superstitious peasants still abounded, but automobiles had been introduced and the army now had tanks and planes, with which it prepared bloody revenge on its neighbours. The royals were still around, if a bit less powerful than before, but are now being schemed against by even more dastardly fascists and communists. When WWII rolled around, Ruritania was likely occupied by the Germans or was possibly itself an Axis power. In either case, brave partisans equipped with formidable beards kept up a heroic struggle against tyranny without forgetting their true enemy — the village on the other side of the valley. After the war, many Ruritanias became Commie Land and continued to be a lurking place for Dirty Communists, either Soviet-backed or home-grown.

With the coming of Hole in Flag revolutions, Ruritania has pretty much reverted to what it started with: ludicrous hair, ethnic strife, poverty, and backwardness. The most noticeable changes are that the monarchy is (usually) gone, replaced by a mock democracy run by some unsavoury generals, ex-communist strongmen, or corrupt bajillionaires, while the Great Powers are now acting through NATO or the UN. Everyone still seems to hate his neighbours, the anarchists may still be around, or they may have mutated into terrorists or plain old gangsters. In recent years, they would have to deal with refugees from Syria or a Qurac substitute, and the citizens will either welcome them with open arms or close their borders. Nonetheless, nationalists will spring up causing ruckus all over the country. With any luck, contemporary Ruritania might be a part of the EU, causing more trouble for its finances than Greece, Spain, and Ireland taken together — and in any case, the only international attention Ruritania seems to get occurs during the Eurovision Song Contest, which it wins frequently and handily thanks to votes from the Ruritanian guest workers omnipresent in rich Western European countries.

If the place shows some of the characteristics of Ruritania, but is also full of vampires, werewolves, Mad Scientists, and other Fantasy or Horror genre tropes, you've strayed over the border into Überwald. We hope you brought some garlic and don't leave the hotel room at night.

Oftentimes, The Old Country and the Quirky Neighbour Country is a Ruritania or an Uberwald.

Not to be confused with Ruri-tania.note You might be thinking of Peaceland there.

A Mediterranean-like island city whose main inhabitants speak in Slavic accents and enjoy punching everything.

A Mediterranean-like island city whose main inhabitants speak in Slavic accents and enjoy punching everything.