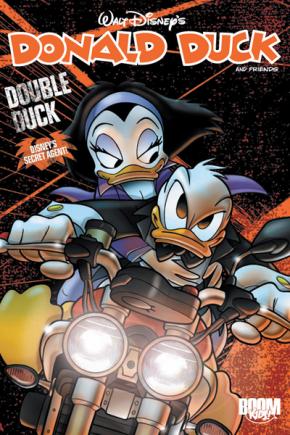 A parking ticket leads Donald Duck to realise he's actually a former sleeper agent for Cloak and Dagger Government Agency of Fiction, The Agency. However, one of their agents has become a Double Agent and taken a MacGuffin; the world isn't going to save itself, so he's back on the job as Agent Double Duck!

Created in Italy, the storyline was introduced in April, 2008; it was written by Marco Bosco and Fausto Vitaliano. It has proven popular enough to become its own separate canon... Until a 2016 crossover story confirmed several ties to Paperinik New Adventures universe.

Not to be confused with "Double-O-Duck", the DuckTales (1987) episode featuring Launchpad McQuack in a spy pastiche.