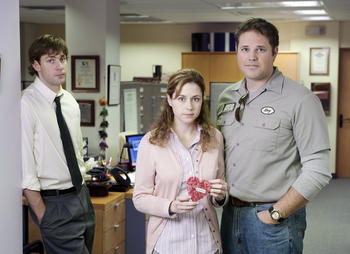 Every successful person at the office wears crisp expensive suits and projects an air of unwavering confidence. The plucky office girl doesn't. She is very talented and clever, has great ideas, and wonderful potential but nobody notices. She is often the butt of jokes, and the rest of the time is just invisible. So, she occupies a low ranking level at the company and seems to have no hope of a promotion despite her great potential. She is very sad and depressed, and often pretty complex but nobody is close enough to her to realize. Usually tasked with gopher (Go-For) jobs such as fetching coffee and notes, and so forth.
Advertisement:

More cynical versions have the higher-ups profiting off her talent but never crediting it.

This will go one of two ways. First, she will get noticed by someone higher up on the food chain, get a makeover and learn to show confidence which gets her noticed. Or, second, she'll forever remain the Plucky Comic Relief, with only the occasional Day in the Limelight episode concentrating on her and her problems, wants, and dreams.

They're almost always Hollywood Homely, too.

Overlaps with The Woobie if she is the lead character. In black comedies, this often overlaps with the Chew Toy. Always Female, because the same behavior and treatment in a man comes across differently. In anime, the Office Lady tends to be this. Related to Badass Bureaucrat and Girl Friday. Contrast High-Powered Career Woman who is far more successful at pursuing her endless ambitions.