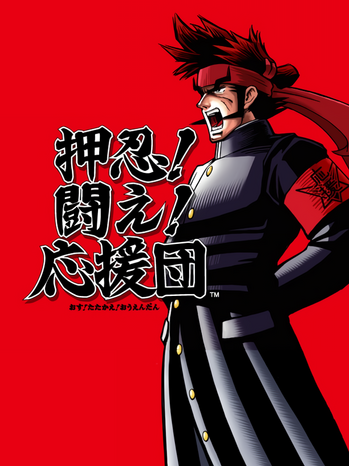 From iNiS, the creators of Gitaroo Man, comes this rather clever Rhythm Game for the Nintendo DS. Osu! Tatakae! Ouendan ("Yo! Fight! Cheer Squad") revolves around a group of male cheerleaders who go around rooting on people all across Tokyo in a variety of tasks to a variety of Japanese pop and rock music. Their clients include Tsuyoshi Hanada, a ronin student trying to get into Tokyo University; Yasushi Tanaka, owner of a ramen shop trying to drum up more business; and Ichiro Tamura, a Salaryman who... grows to fifty feet tall in order to save his daughter (and the city) from a giant blue mouse on the rampage.

Then there's the stage where they get pulled through time and space to cheer on Cleopatra's royal construction crew so she can lose weight via pyramid power...

And for the Grand Finale, they cheer on the whole world to create a Combined Energy Attack big enough to save the planet from impact with a giant asteroid.

It's a weird game, but that's part of the appeal — it seemingly crams as many familiar anime, manga and Japanese Culture tropes in as it can to make it as Japanese as possible. The game mechanics make good use of the DS stylus, as they involve tapping markers that appear on the screen in time to the music.

The original game was a hit with import gamers. It was such a hit, in fact, that it was followed by an Americanized counterpart, Elite Beat Agents. In May of 2007, it also got a full-fledged sequel with the unwieldy title of Moero! Nekketsu Rhythm Damashii: Osu! Tatakae! Ouendan 2 ("Get Fired Up! Hot-Blooded Rhythm Spirit: Hey! Fight! Cheer Squad!"), which featured new music, new scenarios, and a team of friendly rival cheerleaders from the upscale side of town. In addition, there is also a free PC clone called osu!

and the translation for the second here

. And just for fun: computer desktop backgrounds for the first game

and the second game

for the games (and other games made by iNiS), but you won't find much there.

Note: When we refer to the stages, we're using the title of the song featured in them, just like in the Elite Beat Agents page, because repeating the Excited Title! Two-Part Episode Names! over and over again gets pretty tiresome.