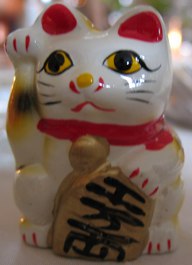 In Japan, shop entrances often have statues of a cat with one paw raised. This is a type of good luck charm called maneki neko, meaning something like "beckoning cat" or "welcoming cat"; in English it's often called "lucky cat". The raised paw represents a gesture meaning "over here" (specifically, the gesture involves holding a hand up, then bending the wrist and/or knuckles forward and back). It may be either the right or left paw that is raised; it's sometimes said that one paw attracts customers and the other attracts money. Often these statues also depict the cat wearing a collar with a bell and holding a golden coin with its other paw. Some modern ornaments are built to allow the cat's paw to move and are often electrically powered.

There are several different origin stories for the maneki neko. One of them involves a nobleman traveling past a rundown temple when he takes shelter from a sudden storm under a nearby tree. The temple's cat beckons him over and he is so fascinated by the gesture that he braves the rain to see the cat up close. Just after the nobleman has left the shelter of the tree it is struck by lightning, and he is so grateful to the cat for saving his life that he makes a huge donation to the temple, which becomes well-known and prosperous.

Compare to Bakeneko and Nekomata and Asian Lion Dogs, for feline-like creatures that are prevalent in East Asian cultures.

The Cat-o-Luck is the same cat doll the trope gives. It slams down on opponents.

The Cat-o-Luck is the same cat doll the trope gives. It slams down on opponents.