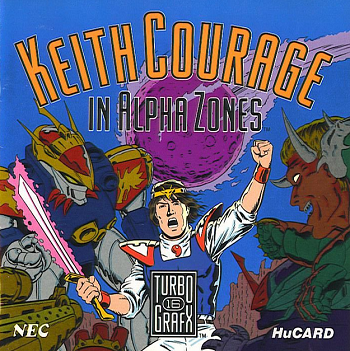 A 1988 Platform Game starring a boy and his mecha suit, which appear in alternating sections of each of seven levels. The boy is only armed with a sword, but he can buy bombs and better swords which the mecha suit can use in the harder second half of each level.
Advertisement:

The game originated in Japan as Mashin Eiyuuden Wataru, a Licensed Game based on an anime by Sunrise of the same title, but when NEC Home Electronics released it in the U.S. and made it the pack-in game for the TurboGrafx-16, they retitled it Keith Courage in Alpha Zones and wrote a new plot involving an Alien Invasion by the Planet of B.A.D. (Beastly Alien Dudes).