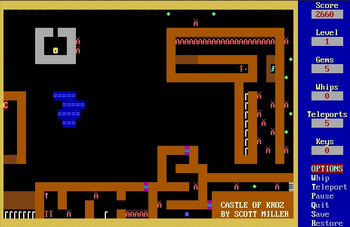 The Kroz series is a series of video games created by Scott Miller. The first episode in the series, Kingdom of Kroz, was released in 1987 as Apogee Software's first game. It was also published on Big Blue Disk #20. The story of the game places the player as an archeologist searching for the priceless Magical Amulet of Kroz in the mystical Kingdom of Kroz. The object of the game is to survive numerous levels of attacking monsters.

In 1991, the other two episodes of the first trilogy were enhanced to their "II" versions, and the original Kingdom of Kroz I stopped being available, being replaced by its enhanced version.

Episode 8: The Underground Empire of Kroz was planned to be released in March 1991, but it was cancelled.

The games were discontinued in 1999, and are no longer sold by Apogee. In March 2009, the whole Kroz series was released as freeware by Apogee. The source code was also released under GPL.

Was inspired by Rogue and in turn inspired ZZT and Mega Zeux.