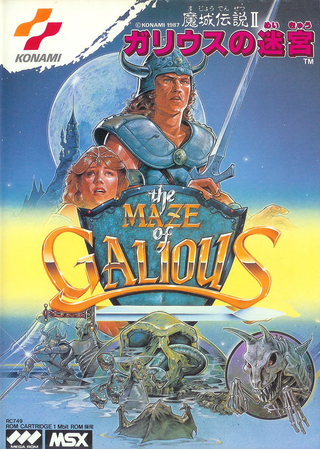 Story: Popolon went into Mt.Atos to rescue Aphrodite kidnapped by Hundos. But it was a trap made by Galious. He attacked the castle during Popolon's absence and also kidnapped and imprisoned a baby from the heaven who was supposed to be born to Popolon and Aphrodite several years later...
Advertisement:

Developed by Konami, Knightmare II: The Maze of Galious is a sequel to the notoriously hard MSX Shoot 'Em Up Knightmare (wasn't expecting that now, did ya?) and was released in 1987 on the same system. You must control two knights, Popolon and Aphrodite, on their quest to rescue the baby Pampas. To do this, you must platform your way through a side-scrolling castle and fight the Great Demons hidden in the depths of ten worlds. Popolon and Aphrodite play slightly differently (for example, Popolon destroys boulders faster and Aphrodite can last underwater longer), but for the most part they act as two separate life bars. To fight each Great Demon, you have to get the Great Key to its world, find the door that gives you access to said world, fight through the world, discover the Great Demon's name, go to the Demon's lair, and type the name into the keyboard to summon it for battle... and kill it, of course. Doing so rewards you with the Great Key to the next world. Repeat until finished. Simple as that!

The Maze of Galious is most notable for being one of the first Metroidvania games. The entire castle is explorable, with treasures and weapons hidden throughout its corridors, as well as "shrines" where you can commune with the gods to save your game, buy weapons and items, and get advice on the game's various puzzles.

Like its shoot 'em up predecessor, the game is also relentlessly brutal. Character death is permanent, and while each character can be revived only once, it is much more common to restart from the last time you saved if Popolon or Aphrodite die. Furthermore, items are not described in-game, and their function is not always obvious; for example, the Dagger allows you to kill all bats in a room by typing "UMBRELLA," and that's one of the more sane ones. And then there's the Great Demons themselves, who generally deal somewhere between half and all of your life with each attack (and that's with the Cape that reduces their damage). In short: your typical late-eighties video game.

The Maze of Galious has gained somewhat of a revival since the release and popularization of the freeware (and now WiiWare) game La-Mulana by indie development team Nigoro, as the latter is explicitly inspired by (and even contains significant shout outs to) the former. In 2022, Nigoro's Naramura poetically acquired the rights to develop an official Galious remake from winning Konami's Action & Shooting Game Contest.

. For those curious about the first Knightmare, Demon Video Games has made their own remake of the game and it can be found here

Note: Due to the nature of the game, the names of the bosses (besides Galious) are spoilers and should be treated as such.