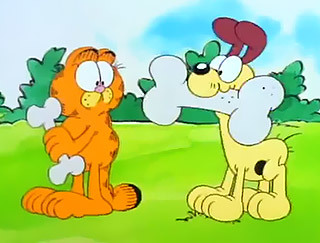 "Do bones really look like that?!?!?! Perhaps in cartoons, but not around these parts, pal. This, my friend, is the fossilized remains of one of the treats that were used centuries ago in order to domesticate the local wild animals."
— Spore, the description of a Fossilized Domesticated Animal Treat.
Advertisement:

In media, whenever a bone that isn't a skull or hip shows up, it's a very good bet it will be the classic femur bone, a straight rod with two evenly-sized bulbs at either end, ignoring the Real Life diversity of ribs, scapulas, clavicles, vertebrae, and all the other diverse bones that hold the body in shape. Possibly justified by the femur being the largest, strongest, straightest bone in the body, so it's instantly recognizable, often well preserved, and useful for everything from improvised clubs to dog chew toys to macabre furniture supports.

In media, those femur bones are often symmetrical from both sides, although they aren't like that in Real Life - the top of the femur has one side - the side which connects to the hip, called the femoral head - much more pronounced than the other, essentially being one very noticeable knob connected to a neck which hooks up to the rest of the bone. This is also known as "Cartoon Bone".

In lighthearted works, these are often visible when using X-Ray Sparks. See also Nothing but Skulls and Cartoon Meat.

Not to be confused with an actual animal femur bone used to cook stock.

Dizzy and Deedee hand over their parent's anniversary bone as a surprise for Fergus.

Dizzy and Deedee hand over their parent's anniversary bone as a surprise for Fergus.