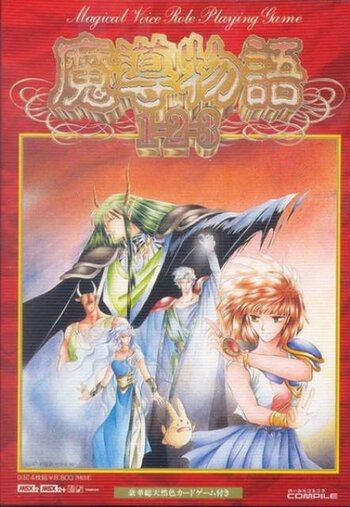 Before they became puzzle game characters.
Madou Monogatari is a Role-Playing Game series originally created by Compile. First appearing on the MSX, most entries follow a young mage-in-training named Arle Nadja, and chronicle her adventures in a world filled with colorful characters and monsters — everything from a fish with human arms and legs to the Prince of Hell himself is here. The cast of these games was later used to create a puzzle game by the name of Puyo Puyo which went on to become infinitely more popular than its parent series.
Advertisement:

Most Madou Monogatari games are first-person dungeon crawlers whose most distinguishing gameplay trait is the near-complete lack of numerical stats: health, attack damage, and the amount of magical power the character has remaining are inferred through text cues and by reading the portrait of the player character, who becomes increasingly distraught as their endurance wears down. The games did experiment with other RPG formats, however, including some with normal stats.

In 1998, Compile sold the rights to Puyo Puyo to Sega in what was thought to be a temporary measure to get out of financial trouble. This included all of the characters and much of the music in Madou Monogatari, but not the series itself. Ultimately Compile failed and went under, leading to the rights to Madou Monogatari finding their way to D4 Enterprise. D4 and Sega have worked together more than once for re-releases of previous Madou Monogatari games, but the only new console or handheld entry since Compile's closure is Sorcery Saga: Curse of the Great Curry God, a game created by Compile's successor company Compile Heart that features none of the original characters.

Retail games in the series include:

Tropes that appear in the Madou Monogatari series: