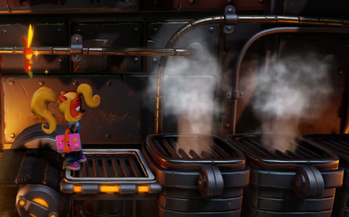 Steam vents are somewhat common as obstacles in video games. Typically, they produce a cloud of hot steam right in front of themselves; this is the actual obstacle.

Such obstacles range from being minor inconveniences to being damaging. They are typically static or intermittent obstacles, but seldom move around, since the pipes attached to them don't. They may become Goddamned Bats if their hit detection is badly programmed. If they are minor inconveniences, they act as such by causing Interface Screw.

If the vents are being pushy rather than harmful, see Vent Physics.