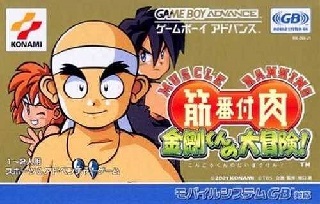 Kinniku Banzuke: Kongou-Kun no Daibouken! is a Japan-exclusive Sports game developed by KCE Studios and published by Konami for the Game Boy Advance in 2001. It is based on the Unbeatable Banzuke sports show Ninja Warrior is derived from.
Advertisement:

The game is made up of 7 reflex-based challenge minigames based on athletics competitions, like in Konami's own Track & Field series. Those are wrapped up in a story about Kongou, a young athlete training to find his missing father and defeat Dark Muscle, a demon overlord from another world.

Also released by Konami in the same year for the GBA was Kinniku Banzuke Kimero! Kiseki no Kanzen Seiha, which like the previous Kinniku Banzuke GB games was a straight adaptation of the Ninja Warrior show and its four obstacle courses.

A three episodes long anime by Studio Pierrot was also released four days after the game on July 30, 2001. While it retains the extreme sports premise and some of same characters, its different plot has Kongou and friends being invited to a competition hosted by Dark Muscle on a remote island.

The Game
The Anime