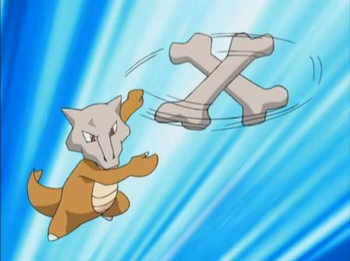 Marowak giving you a bone to pick with it.
"When are you going to run out and fall apart?"
— Egoraptor, commenting on the bone-throwing skeletons, Sequelitis — Castlevania vs. Castlevania II
Advertisement:

Bones flung as projectiles. Bone projectiles are extremely commonly thrown by Scary Skeletons. In most cases the launchers never run out of bones. This brings up the question whether the creature uses its own bones, the bones of others, or just bone-like things it somehow creates or summons. Usually Stock Femur Bones.

A subtrope of Abnormal Ammo and Bad with the Bone. Compare Spike Shooter, Throwing Your Sword Always Works, and Improvised Weapon.