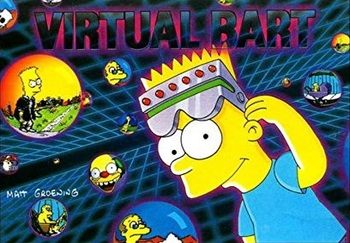 Virtual Bart is a Simpsons game by Acclaim released for the Super Nintendo and Sega Genesis in 1994. The game is a successor of sorts to Bart's Nightmare.
Advertisement:

The game's story begins when during the Springfield's Elementary School science fair, Bart wanders into a virtual reality simulator from one of his classmates. There, Bart experiences several virtual levels he must complete to escape the machine: