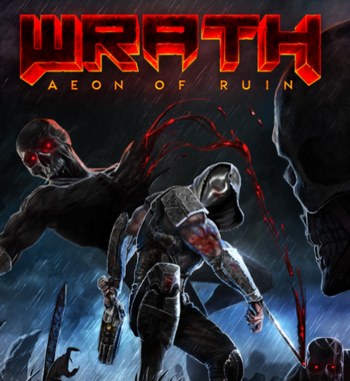 WRATH: Aeon of Ruin is an upcoming First-Person Shooter co-published by 3D Realms and 1C Publishing. Similar to 3D Realms' own Ion Fury, which runs on a modified Build Engine, WRATH runs on another 90's game engine, namely the Quake I engine* specifically, a modified version of the engine's Darkplaces source port, and it's developed by Quake modding scene veterans, to boot; chief among them is game director Jeremiah "KillPixel" Fox, who'd been working on WRATH for years before 3D Realms contacted him and offered to help him make the game. WRATH takes inspiration from the very game it shares an engine with, alongside several other 90's FPS titles.

In the game, you take on the role of Outlander who, after a time drifting the Ageless Sea, washes up on shore to find a world in the grasp of death. The Old World is gone. But dark forces still remain. A white-cloaked figure known as the Shepherd of Wayward Souls sets upon you a monumental task: hunt down the five Guardians of the Old World that are still standing. As implied by their title, these huge angelic beings used to guard the world from threats, but corruption has turned them evil, and it's up to you to kill them all. You'll trek ruins, plunge into darkness, and fight the most terrifying of monsters on your way to each Guardian. It's a journey you're highly unlikely to come back from alive... but hey, it's worth a shot.

WRATH released in Early Access on PC via Steam and GOG on November 22nd, 2019, but this is only a taste of first blood; the game's full release will land on PlayStation 4, Xbox One, Nintendo Switch, Mac, and Linux alongside PC.

You will not survive WRATH: Aeon of Ruin's examples of: