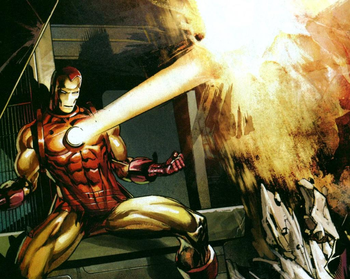 "Full court shot from Thorias. He's really showing us what a man with a cannon in his chest can do!"
— Marv Albert, Futurama
Advertisement:

One of the great signature Super Robot weapons, after the Rocket Punch. The Chest Blaster is a heavy weapon, ranging from BFG to Wave-Motion Gun in power, built into the chest of a Humongous Mecha. Usually requiring little more than an Ass Kicking Pose and a vocal command to activate.

Real Robots occasionally have torso-mounted weapons, but these are usually lighter, secondary guns, although some do have racks of missiles mounted in the chest or shoulder. If the Robot is made to look female, well, you know exactly where the missile launchers are.

Practically speaking, the chest is a pretty bad place to mount a weapon. It would make more sense to put it on the arm, or pretty much anywhere where it could be aimed in a direction other than where the user is facing. Really, this trope only exists for two reasons: 1) so the user can kill you while flexing, and 2) because the beam appears to be emanating from the heart, implying that their desire to kill you comes from their very soul.

A Super-Trope to Torpedo Tits. Compare Breath Weapon, Eye Beams, Psi Blast and Shoulder Cannon. Not to be confused with Chest Burster.