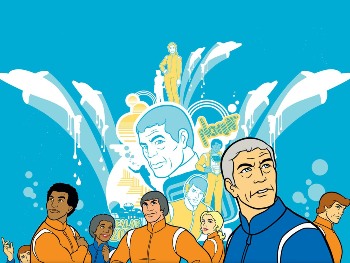 They look the same, but they're very different.
"If you're looking for me,
You'd better check under the sea,
Cause that is where you'll find me...
Underneath the sealab
Underneath the water
Sealab...
At the bottom of the sea..."
Advertisement:

Sealab 2021 is one of the first Adult Swim original shows, which parodies the 1970s animated series Sealab 2020 (and, to a lesser extent, the entire genre of crudely-animated 60s and 70s cartoons produced by Hanna-Barbera) through combining recycled footage and animations with a Gag Dub. The show lasted from November 2000 to April 2005 with a total of fifty-two 15-minute-long episodes over four seasons.

Set 20 Minutes into the Future, the series recasts the crew of the titular undersea colony as a group of extremely unstable individuals, all of whom are too crazy or Too Dumb to Live. Several episodes end with the destruction of Sealab as a result of the crew's hijinks (directly or indirectly).

Minor characters include Hesh Hepplewhite, a sarcastic engineer and aspiring rap artist who frequently speaks in ghetto-slang and/or refers to himself in the third person; Dolphin-boy, a rotund human child who only speaks dolphin; Dr. Ilad Virjay, the station's medical doctor and Hindu-rock icon; and Ted from Accounting.

Adam Reed and Matt Thompson initially created the idea while working for Cartoon Network as production assistants; they found tapes of 2020, wrote new dialogue for them, and presented the idea to the network. It passed on the idea in 1995, but reconsidered the idea five years later (around the time it had started to develop [adult swim]). As a result of this approach, Reed and Thompson made the show's pilot and several episodes from the first couple of seasons using Stock Footage from Sealab 2020; they replaced the original banal environmentalist plot lines with Black Comedy and other weirdness, then edited the footage (and added in some original touches of their own). A notable exception to this approach occurs with the episode "7211", which remade one of the original Sealab 2020 episodes with the 2021 cast and played it completely straight — but there's a clue to the viewers that something is up with this remake: after the captain of the sub decides to team up with Murphy despite holding a grudge against him, a '70s-era title card which says "PLACE COMMERCIAL HERE" is displayed. (During the end credits of the episode, Sealab explodes. Again.)

Midway through the show's run, Harry Goz (the voice actor for Captain Murphy) died, which caused a major change in tone for the entire series. The one-off crazy elements of the earlier episodes were dropped, and after Captain Murphy left Sealab to fight in the spice wars, he was replaced with the slightly-more-sane Captain Shanks (who, as noted above, was portrayed by Harry Goz's son). The series retained its trademark surrealism while experimenting with long-form storylines (including as Debbie's relationship with Quinn, the saga of Marco's apparent death, and the introduction of Sharko, Marco's half-shark/half-human son). These episodes also featured more original animation than stock footage, and it's easy to see the shift in tone from earlier seasons. In its typical surreal fashion, the last episode featured a series of fourth-wall-breaking scenes involving the characters as actors who know Sealab is a TV show, and the show faded to black with the promise of airing a trailer for a new horror film starring the characters.

Filled with surreal humor and meandering, random, nonsensical stories, Sealab helped set the tone for the emerging Adult Swim, and its influence can be felt across the first several years of the program.

This show now has a Recap page in progress.

Adam Reed went on to helm Frisky Dingo and Archer, the latter of which had a Fake Crossover with this show in "Sea Tunt"

Oh, there go my tropes again:

Do you want the mustache on, or off?
Off, please.
Too bad.