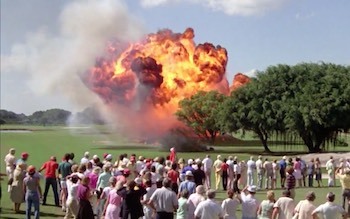 Because every golf tournament should end with a pyrotechnics display.
"Or does it explode?"
— Langston Hughes, "A Dream Deferred" (last line)
Advertisement:

Sometimes a comedic piece, rather than a punchline, will have everything suddenly explode instead. The randomness combined with the coolness factor of explosions is guaranteed to get some laughs.

This is an example of Stuff Blowing Up. Also compare Drop the Cow.

"I am never napping again."

"I am never napping again."