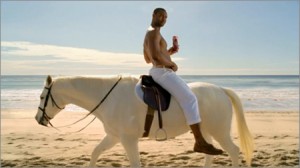 He's on a horse. Backwards.
"Anything is possible when your man smells like Old Spice and not a lady. I'm on a horse."
—Isaiah Mustafa, the Old Spice Man
Advertisement:

The Man Your Man Could Smell Like is a 2010 ad campaign for Old Spice-brand male hygiene products starring ex-NFL player Isaiah Mustafa. It started with a single commercial

in which Mustafa (a.k.a. Old Spice Man) describes everything that would be possible if the target audience's man stopped using lady-scented bodywash, and the video quickly went viral.

The success of the first commercial paved the way for a second,

which proved to be just as popular. Two weeks later, Wieden Kennedy boldly went where no advertising agency had gone before and filmed dozens of short, improvised scenes of Mustafa giving personal responses to everyone (from Ellen DeGeneres to Anonymous) who had commented on the new Old Spice ads via social network. Almost 200 video responses in total were uploaded to YouTube between July 12 and 14, 2010, all of which can be viewed on Old Spice's YouTube channel.

For Superbowl 2011, Mustafa starred in another one.

A challenge was issued and accepted

in July of 2011, when a long-haired European named Fabio (yes, that Fabio) declared himself the new Old Spice Man. Mustafa and Fabio responded to questions on Facebook and YouTube in shorts similar to the video response campaign the year before, with viewers invited to vote for who should be the real Old Spice Man. Mustafa won, but immediately announced that he would be taking a vacation. In the interim, the Old Spice Man role was filled by various NFL players, and more notably, by the addition of Terry Crews as a much louder, nuttier, more explosive, and most importantly, more POWERFUL Old Spice Man.

For the 2011 holiday season, the classic Old Spice Man returned with a promise

to give gifts to all of Earth's 7 billion inhabitants. He returned again in August 2015 to advertise the Timber and Swagger product lines... and wound up paired with Terry Crews's POWERFUL Old Spice Man

advertising the Bearglove line- and in each ad they fought over which one people should use.

In the commercials, Mustafa recites his monologue in Dramatic Deadpan during a single long take with lots of props and minimal CGI. While arbitrary costume changes and changes of scenery are the hallmarks of the televised commercials, the YouTube video responses were all simply Mustafa standing in a bathroom

shirtless and in a white towel with several recycled props.

Old Spice's YouTube channel is both the #1 most subscribed and the #1 most viewed sponsor channel of all time, and the video responses gleaned a higher viewership in their first 24 hours than Barack Obama's victory speech. Sales of Old Spice Red Zone After Hours bodywash (the specific product the commercials advertise) have dropped 7% since it debuted; however, Old Spice product sales in general have shot up more than 170% since the debut of The Man Your Man Could Smell Like. The style of the commercial has also become the brand's identity, with many commercials following in the same general style and their product labels also echoing it (here's one such example

). Thus it's a highly unusual case of What Were They Selling Again? meeting Tropes Are Not Bad.

Mustafa returned on January 22, 2020, with a new series of commercials, "Smell Like Your Own Man, Man", introducing his character's son, who is more to-the-point than him.

The popularity and acclaim of the commercials have even garnered Isaiah Mustafa an award for them and enabled him to break into acting in a number of roles ranging from cameos to supporting parts in film and television.

These tropes are now diamonds!

"Anything is possible when your trope is described like The Man Your Man Could Smell Like article, and not a member of the Permanent Red Link Club. I'm on an index."