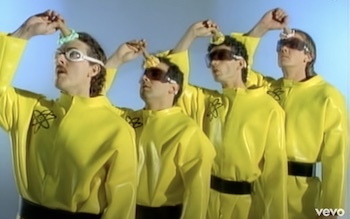 "Weird Al" Yankovic In The Style Of Devo
Advertisement:

Taking a work that's a member of a certain genre, and doing it just the same, except as a different genre. For example, taking a rap song and getting a barbershop quartet to sing it; or showing a comedy-adventure from the Sympathetic P.O.V. of the villain, making it a tragic drama; or just taking a page from a famous novel and adding in the stylistic quirks of a completely different writer.

Can be applied to any form of art that can be categorized.

Recycled IN SPACE! can be this, but usually isn't. Generally changes the meaning. For music, contrast with Suspiciously Similar Song, where the intention is to resemble the original as closely as possible while still avoiding copyright-breaking. This is one form of X Meets Y. Don't confuse it with Pastiche, which is when a genre is imitated as closely as possible by a new work. Advertising by Association is when this is openly invoked as a selling point; sometimes it is an example and sometimes not (in those cases, it's another work from the same creator, with another style), but the executives surely want you to think it is. Compare also Homage when an original work makes a deliberate tribute to another work.

Alternative Title(s): Done In The Style Of