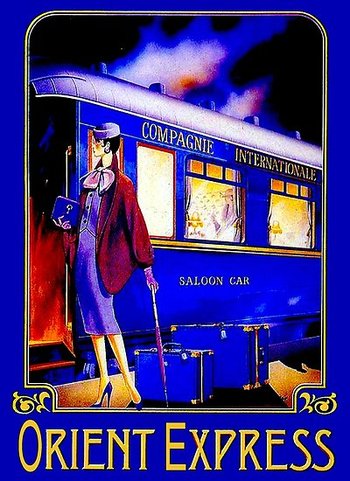 A variety of rail services have used the name "Orient Express" — we're covering all of them here:

The original endpoint of the route, Sirkeci Terminal on the European side of Istanbul is a sight to behold and while it does not see train service for the duration of construction work during the Marmaray project, its orientalist architecture is still a modern marvel.

The route was famed for its luxury sleeping and dining cars, having a general air of opulence about it. This said, there were no en-suite toilets - these were found at the end of the carriages. It should be pointed out that this was not one 'complete train', but a series of through carriages coupled on and uncoupled at various points in the journey, with locomotives changed at national borders. The most modern traction was generally used, so diesel and electric locomotives were increasingly common as time went by.

As mentioned above, this was by no means the only CIWL operation, with Le Train Bleu aka the Blue Train (which turns up in another Agatha Christie novel, The Mystery of the Blue Train) from Paris to the South of France, with a through carriage from Calais, being very popular with the British upper classes. The TGV service from Paris to Nice took much of its passengers away and it was gradually reduced to a seated and couchette service only, stopping entirely from 2017 to 2021.

The examples below feature the Orient Express in fiction, and fictional railway services clearly inspired by it.