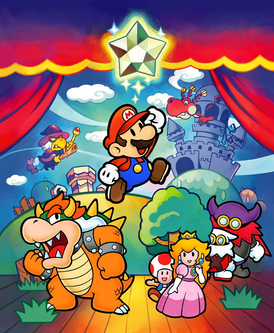 Bigger. Better. More creative.
Paper Mario: The Thousand-Year Door is the 2004 Nintendo GameCube sequel to the original Paper Mario and the second game in the Paper Mario series. It starts like a lot of Mario games, with a letter from Princess Peach. She wants Mario to meet her at a distant town called Rogueport, to help her search for a legendary treasure indicated by the map she sent along with the letter. By the time Mario actually pulls into port, Peach is gone, and for once it's not Bowser who kidnapped her (and he's very, very peeved about that).
Advertisement:

The mysterious secret society of X-Nauts and their leader, Sir Grodus, are the ones responsible this time. They're after the same treasure as Mario, and are hanging onto Peach for an unknown purpose related to this treasure hunt. Mario learns from the Goomba Professor Frankly and his young assistant Goombella that said treasure is locked behind the eponymous Thousand-Year Door beneath town, and that opening the massive door involves collecting the Crystal Stars scattered across the surrounding regions. As the game goes on, the nature of the treasure and why the X-Nauts are holding Peach comes to light, and let's just say said treasure is not a pile of gold coins.

The game retains the same paper aesthetic, Turn-Based Combat, Action Commands, and Better than a Bare Bulb humor of the previous game, with some extra tweaks introduced. Action Commands are also needed for the Limit Break moves that are attained with each Crystal Star. The previous game's damage-reducing button presses during enemy attacks are supplemented by a Blocking Stops All Damage mechanic with a narrower window of accuracy. Each battle is fought in front of an audience that must be pleased by a good performance in order to increase the amount of Star Power recovered per turn. Your partners now have a health meter, and can be incapacitated if they run out (though the battle will still go on as long as Mario is alive). World exploration is aided by Mario gaining several paper-themed transformations like a paper airplane and a paper boat.

Elite X-Nauts wear red and black uniforms and defend the moon base where the evil Grodus is holding Peach.

Example of:
Red and Black and Evil All Over

Elite X-Nauts wear red and black uniforms and defend the moon base where the evil Grodus is holding Peach.