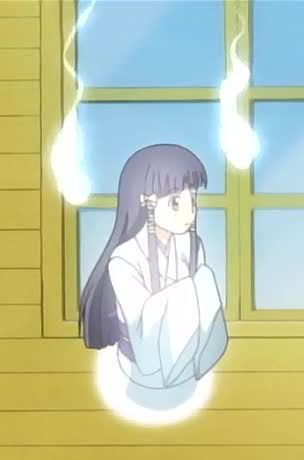 Japanese ghosts and those they possess are traditionally depicted as surrounded by floating blue flames known as hitodama. The victims of possession traditionally tend to keep their free will, but are plagued with fatal bad luck.

The possession part is rarely played straight in anime. People dressing as a ghost will usually tie burning candles to their heads to simulate the light. Being surrounded by ghost lights are a visual indicator of someone who is already a ghost. (Which raises the odd Fridge Logic; if one Ghostlight is a soul, why are ghosts surrounded by multiple ones?) Some ghosts can use this form as Ball of Light Transformation.

Sometimes, when a character is "possessed" by mortification or depression about something, they will be portrayed as squatting in a (possibly nonexistent) corner, back turned to the main cast, with a black halo and ghost lights.

Interestingly, hitodama (or kitsunebi or onibi) are created by rotting compounds of a body. Although these lights give a ghostly/comical atmosphere on TV, it's perfectly possible to witness them in real life by this explanation, and who knows what they mean then...

Subtrope to Faux Flame for "flames" that aren't actually fire. See also Spark Fairy (fairies or magical insects depicted as a point of light) and Will-o'-the-Wisp (a light that leads unwary travelers into danger). Can be considered a type of Magic Fire.