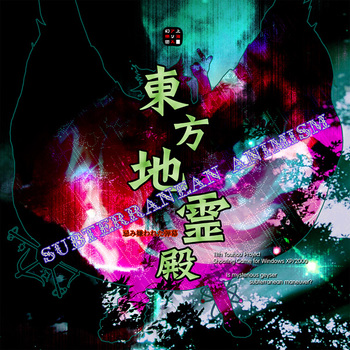 Touhou Chireidennote "Palace of the Earth Spirits" ~ Subterranean Animism is a video game created by Team Shanghai Alice for Windows computers in 2008. It's the eleventh videogame installment in the Touhou Project franchise.

A geyser erupts near the Hakurei Shrine, and Reimu looks forward to turning it into a proper hot spring to attract patrons. But with the water come vengeful spirits from deep underground, and Patchouli Knowledge takes this as a sign that something dangerous is happening in the Underworld. Gensokyo has ancient treaties with the Underworlders which forbid surface youkai from entering their domain, but the youkai sage Yukari Yakumo promises that she will send humans to investigate.

This game features only Reimu and Marisa as playable characters, but they can choose from one of three youkai partners to direct them from above ground (Yukari/Suika/Aya for Reimu, and Alice/Patchouli/Nitori for Marisa), each granting a different shot type. The value of point items is modified by your partner's signal strength, which is increased by grazing bullets or staying above the Point of Collection.